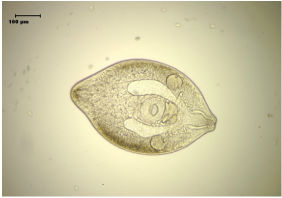 Mesocercariae of Alaria spp.
Parasites have numerous ways of affecting their hosts that do not necessarily lead to host death, yet still severely impact host fitness. For example, parasites can alter host physiology and/or behavior in ways that decrease, or in some instances eliminate, the host's reproductive capabilities.

Garter snakes harbor several genera of endoparasites including trematodes and nematodes in their lungs as well as trematodes that aggregate in their visceral fat and tail tissue. My dissertation research explored the implications of these parasites for garter snake reproductive biology, including possible influences on reproductive behaviors, gamete production, or pheromone expression.

In collaboration with Drs. Michael Kent and Sean Spagnoli (Oregon State University), I assessed the histopathology of infection by a trematode in the Alaria genus. Garter snakes act as a paratenic (non-obligate transport host) for the mesocercarial stage of these parasites, which tends to aggregate in the snakes' tails. The damage caused by these trematodes can have rather severe consequences including tail loss, which adversely affects mating success in both male and female snakes. Molecular work in collaboration with Dr. Vasyl Tkach (University of North Dakota) demonstrated that Alaria infections tend to be co-infections by at least three species of the parasite.

As reproduction and immune system activation are both energetically costly processes, they tend to trade-off with one another. Thus, immune activation often leads to depressed reproduction or vice versa. To explore such trade-offs in garter snakes, I conducted experiments involving lipopolysaccharide (LPS) treatments. LPS is a nonpathogenic compound derived from the cell wall of Gram-negative bacteria. As such, it is useful for studying the effects of an immune response independently from the pathological effects of microbes. My work in this area demonstrated that during the breeding season male garter snakes depress reproductive investment when immune challenged and this depression appears to be hormonally-mediated. Outside of the breeding season, I found that snakes vary food intake to help compensate for immune activation; however, food intake varies in different manners depending on snake sex and reproductive condition.

The skin lipids of female red-sided garter snakes (Thamnophis sirtalis parietalis), a subspecies of the common garter snake, contain a methyl ketone-based sexual attractiveness pheromone which is essential for eliciting male courtship behaviors. The pheromone, which was first identified in the 1980's by my PhD advisor, Robert Mason, is one of relatively few vertebrate pheromones characterized to date. Early in my PhD, I conducted chemical analyses of skin lipids from other Thamnophis species from Manitoba and Oregon to determine whether they also contained methyl ketones and, if so, whether the chemical profiles vary across species. My findings indicated that not only do the skin lipids of these other garter snakes contain methyl ketones, but the profiles differ significantly from one another with more pronounced differences occurring between sympatric species. These results suggest that variation in methyl ketone profiles could have a role in reproductive isolation of garter snakes with overlapping ranges.

I am also using my chemical ecology skills to assess whether female pheromone profiles vary in quantity or quality according to the level of parasite burden and whether males are able to recognize such variation.